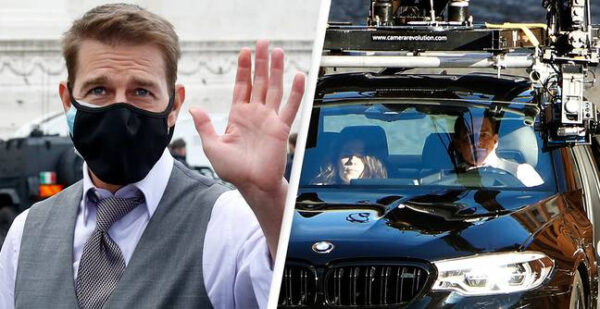 Tom Cruise reportedly had thousands of pounds worth of luggage stolen after thieves took his the actor’s bodyguard’s £100,000 BMW.

The 59-year-old is currently in the UK filming scenes for the forthcoming film Mission: Impossible 7 in England.

According to The Sun, the thieves used a scanner to clone the signal from the vehicle’s ignition fob while it was parked outside The Grand Hotel in Birmingham.

A source told the publication: ‘Tom had been driven around in the car while in Birmingham and some of his ­luggage and belongings were inside it when it was taken.

‘It’s since been recovered by police because it was equipped with an electronic tracking device but everything inside it had gone.

‘It’s a huge embarrassment for the security team and the guy who had been driving it was hopping mad — but not as mad as Tom!’

The bodyguard in charge of Tom’s security staff was said to have made the discovery of the stolen car early on Wednesday August 25.

The insiders said the thieves were able to steal the car in only minutes after it was left outside the hotel which is only a two-minute walk from the West Midlands Police headquarters.

The police also released a statement regarding the theft, reading: “We received a report of a BMW X7 stolen from Church Street, Birmingham in the early hours of Tuesday morning.”

“Inquiries are ongoing,” according to the police.