Former BBNaija lockdown housemate, Kiddwaya has confirmed he and former co-star, Erica have gone their separate ways. The couple met during the reality show in 2020 and kicked off a relationship that many hoped would lead to the altar as they were so close and into each other in the house.

However, during an interview with Punch in January 2021, Kiddwaya stated that he was still in search of love. This caused a lot of confusion as he and Erica have been spotted in many places acting like lovers, and they even traveled to Sierra Leone together.

His comment caused a lot of reactions as many felt his answer was disrespectful to Erica. 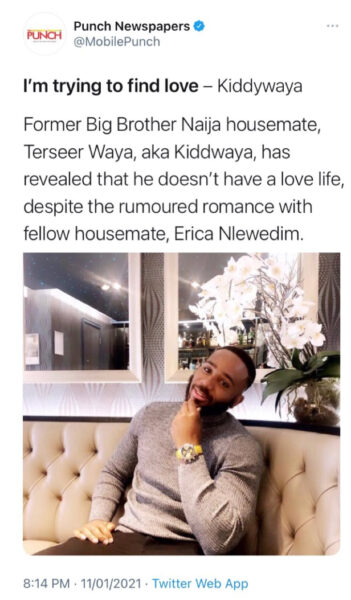 However, in a Question and Answer session with his fans on IG, Kiddwaya gave an explanation as to why he gave such an answer. He described Erica as his ”Girlfriend at the time”, implying that they are no longer a couple. He said he made the statement about being single because he wanted to keep their relationship private.