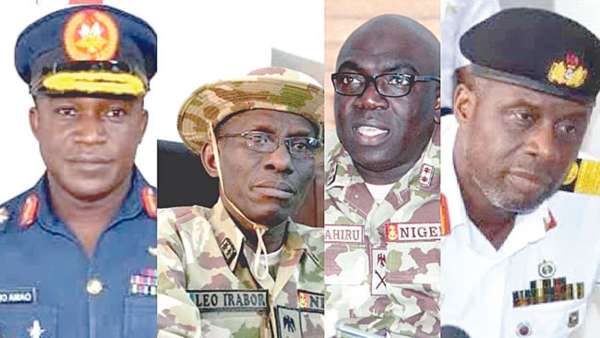 They spoke separately before the House of Representatives joint committee during their screening.

The Chief of Defence Staff, Major-General Lucky Irabor, said he intended to foster a better army that would undertake its duties as enshrined in the constitution.

“As a military commander, I intend to have leadership focus in outlining the broad areas, to this, I intend to build a very professional armed force that is effective, agile, result-oriented, and of course, one that is loyal to constituted authority,” he said.

The Chief of Army Staff, Major-General Ibrahim Attahiru said he would reposition the army to its proper professional place and adopt a better approach that would make the army more robust to provide adequate security for the country.

“Emphasis would be particularly on the role of government and role of society approach where each and every Nigerian would be part of the security architecture to bring an end to our current problems,” he said.

The Chief of Air Staff, Air Vice Marshall Isiaka Amao, said the NAF would strengthen its doctrinal trajectory while pursuing the objective of joint military operations in the fight against insecurity.

The Chief of Naval Staff, Rear Admiral Auwal Gambo, said he would consolidate on the process of ensuring loyalty, cooperation, commitment, knowledge and skills of all naval officers, ratings, and civilian staff.

Defence Minister Major-General Bashir Magashi (rtd) said the Armed Forces was more than ever before to “subordinate the military to civil authority to promote cohesion and national unity in the country.