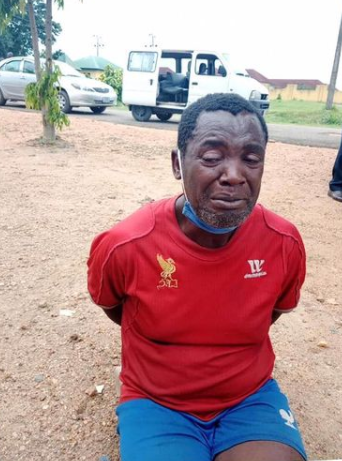 The man who was paraded at the police command headquarters in Osogbo, Osun State, blamed the theft on his “excessive love for his wife and children”.

Speaking to newsmen at the command headquarters, Maruf said his life changed negatively after his wife deserted him and took their five children along. According to him, he was living a good life while he was in Lagos until about two years ago when he relocated to Osogbo.

“It is true I stole a Korope at Criterion Nursery and Primary School, Kelebe area, after working with the school for about three months. I did it to make money and take care of my wife and children.

“I was living a decent life in Lagos State before things nosedived over two years ago and we relocated to Osogbo. Yet, there was no change and my wife left with our five children.

“Since that time, things were even more difficult. So, I took to driving the school minibus. After about three months, I went into the school and drove it away to Lagos.

“I was using it as a passenger bus before I was caught after two days in the Ajah area of Lagos State. I love my wife and children and can do anything for them.”

The state Commissioner of Police, Olawale Olokode who told newsmen that the suspect ran away with the bus to Lagos State, where he converted it to a commercial bus before being arrested by the police, added that the man will be arraigned in court soon.