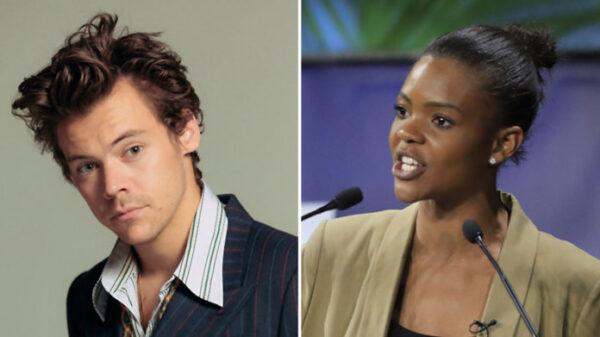 Harry Styles threw some subtle shade at Candace Owens on Wednesday in response to the political pundit’s criticism of his Vogue cover, in which he donned a Gucci ball gown.

“Bring back manly men,” he captioned a picture of himself wearing a powder blue suit and ruffled shirt while eating a banana.

The conservative wrote, “There is no society that can survive without strong men. The East knows this. In the west, the steady feminization of our men at the same time that Marxism is being taught to our children is not a coincidence. It is an outright attack. Bring back, manly men.”

Styles also addressed Owens’ remarks in a new interview with Variety on Wednesday, stating, “To not wear [something] because it’s females’ clothing, you shut out a whole world of great clothes. And I think what’s exciting about right now is you can wear what you like. It doesn’t have to be X or Y. Those lines are becoming more and more blurred.”