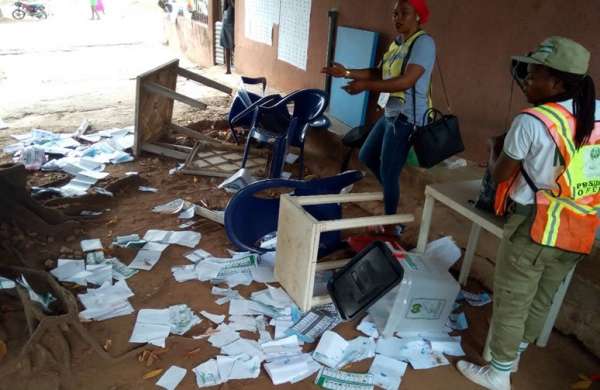 This is even as an explosion rocked one of the polling stations in Aba North Local Government.

It was gathered that Ozoemena, who is also the campaign officer of the APC candidate, Mascot Uzor Kalu, was kidnapped at the Industrial Ward 2 area of Aba.

“Engr. Mike Ozoemena, director of publicity, Mascot Uzor-Kalu Campaign and APC collation officer in Aba North, has been whisked away by some men on white Hilux van from his ward, Industrial Ward 2, Aba North to an unknown destination.

“We don’t know his whereabouts. We don’t know where they’ve taken him to and we’re calling for his immediate release,” he said.

He added that the incident would not deter the APC that is currently in good reckoning in the state to take over in 2023.

Although no life was lost, but it was gathered that electoral materials were scattered as workers, voters and party agents scampered for safety.

A voter, who gave his name as Chinedu Eze said that they were on queue when a loud sound was heard in the area and everyone fled.

“We were on queue; some people were being accredited when we heard a loud sound. Everybody took to their heels. It was like a bomb and we didn’t know where it came from,” he said.

The cause of the explosion and the device could not be immediately known, but security agents stormed the area and restored order.

Elsewhere, voting went on without hitches as people queued to cast their votes.

Efforts to get the reaction of the state Commissioner of Police, Mrs Janet Agbede, was unsuccessful.