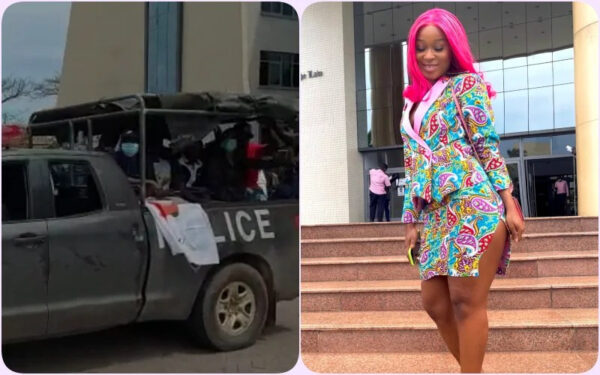 Actress Efia Odo and 14 other #FixTheCountry campaigners have been arrested by the Ghanaian police.

They were arrested after they came to court to witness the final ruling between #fixthecountry campaigners and the Ghana Police service. The court case centered on if the group should be allowed to stage a street protest.

After hearing legal arguments on Friday morning, the High Court adjourned proceedings to deliver a ruling at 1:30 pm. During the period when the legal arguments were going on, some of the campaigners pitched camp in front of the law court complex holding placards .

However after they were joined by their colleagues who were in the court room after the proceedings, police officers from the Accra Region Command arrived and arrested more than 10 of them while they were taking photos.

The campaigners who have in the last two months demanded that government fixes what they said is, worsening living conditions in the country, have been met with stiff resistance from the Ghana Police Service, which has cited prevailing Covid-19 restrictions as reasons for not allowing them to protest.