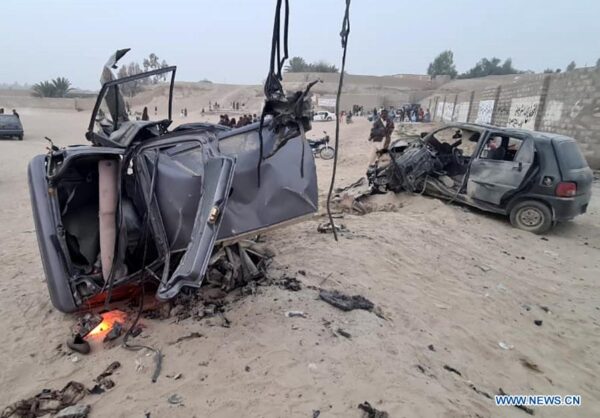 Two people were killed and eight others injured when a bomb went off near a football ground in Panjgur district of Pakistan‘s southwestern Balochistan province on Saturday, a spokesman of the provincial government said.

The explosion happened when boys of two teams and spectators were leaving the ground after a game, Liaquat Shahwani, the spokesman, told Xinhua.

He added that the injured included boys of a high school of the district who were playing and watching the match and the injured have been shifted to a nearby hospital. Several of them were in critical condition.

“The resolve of the provincial government to eliminate militancy cannot be deterred by such cowardly acts. The elements involved in the attack will be nabbed and brought to books,” Shahwani said.

Talking to Xinhua on condition of anonymity, police sources from the province said that the explosion was triggered by an improvised explosive device planted on a motorbike by some unknown militants who fled the scene.

Two vehicles were also damaged in the powerful explosion, the sources added.

Shahwani said that the hospital administration has been directed to provide the best possible medical treatment for the injured people.

Meanwhile, an inquiry into the incident has been kicked off by police after cordoning off the area.

No group or individual has claimed the attack.